I want to tell you the story of how The Portal studio came to be. Because it illustrates beautifully how we are always playing a divine game, whether we realize it or not. Once we're conscious of it, and say YES to it, we can actually start to have some fun playing this game, and not take everything so seriously. Here's what happened.

Nearly a year ago, my husband and I were away in Thailand and I was on FaceTime with my dear friend and co-founder of Kundalini Yoga Stratford, Ayrin Mackie, who was checking on things at home and going through my mail with me. I asked if she'd go out back into the studio to grab something for me, and when she opened the studio door and walked in, camera still on, the first thing I saw was steam rising all around and a shocked expression on her face.

The studio was flooding.

Thank God for wonderful friends! Here we were thousands of miles away and hot water was gushing from burst pipes in the studio floor (and had been, maybe for days, who knew)! Ayrin called her husband Thelon right away, lucky for us, because he's in the renovation business and understands these things, and he rushed over to shut off the water. Long story short, he and Ayrin basically took over, contacted the plumbers, and calmed the waters, literally. But it was a disaster. The steam from the hot water had basically dissolved the drywall ten feet up and the inner walls were literally crumbling in. Nearly everything in there was destroyed by the water. The insurance got involved and declared a total loss. 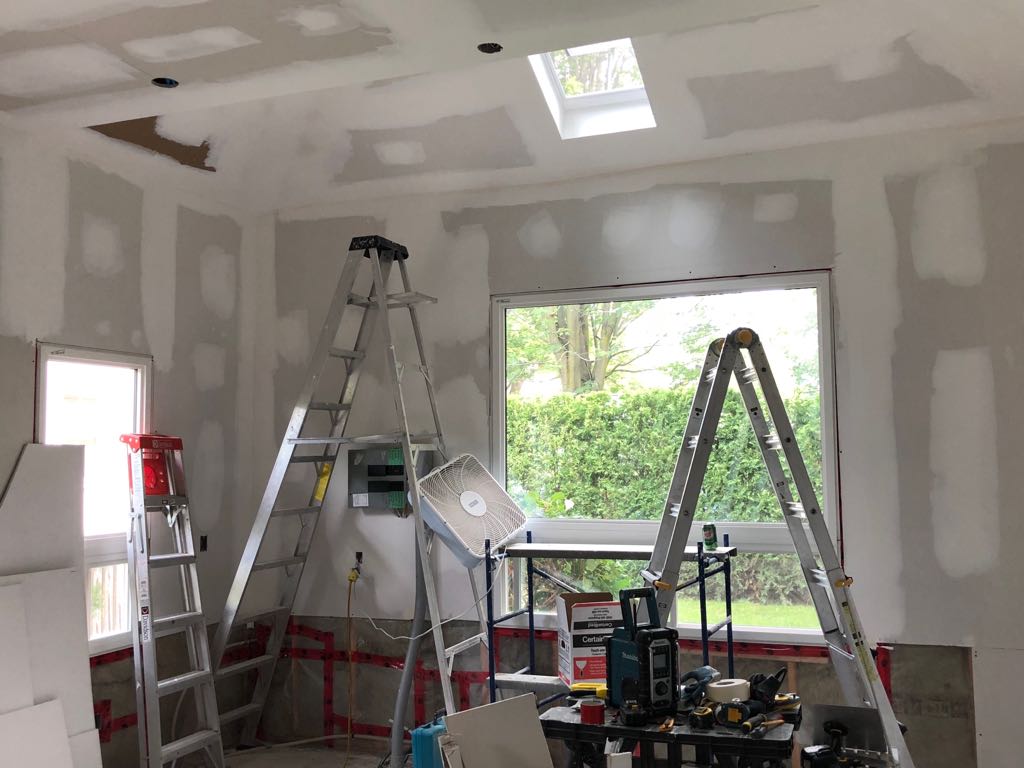 My first reaction was to tighten up in fear. Thankfully, my husband, blessedly unruffled by situations like this, immediately reminded me that I had been wanting to renovate the studio for two years. (And this was true, I had even talked to Thelon about it and he'd drawn me up a budget for my wish list! I told him I wanted to do it, I just needed the money. And time passed...) But at that moment, my husband reminded me to say YES to the situation. YES to the game, rather than tightening up in fear and missing the opportunity to see the bigger picture.

During the preceding three years, I had begun teaching some classes and special workshops in the studio, but essentially the studio didn't know what it was yet. I had originally used it for my perfume atelier when I was actively making natural perfume, a small artisanal business I had run for about 5 years previously. But as I felt the energy emptying itself from that pursuit and moving more and more into yoga and spiritual growth, I began slowly reducing the amount of space perfume was taking up in the studio, and opening up more space (literally) for a few people to come in for yoga class. But the space was in need of upgrading. It had been a carpentry shop for the previous owner, had no adequate heating system, no real foundation, buckling floors, poor insulation that caused incense and candle smoke to leave black marks on the walls... and a loft full of unfinished business in boxes, literally hanging over my head. It was also full of spiders. And I'm scared of spiders.

Very funny, universe. You think I don't realize this place is a metaphor for my relationship with myself? Oh, wait a second, I didn't.

And then the light went on inside my mind. I realized that as much as I had been gradually 'upgrading' my frequency through a period of intense spiritual work at ANS (the ashram and school for spiritual growth I'm involved with in France), the studio, where my at-home practice had been centred and evolving since we moved to that house in 2014, was receiving a concomitant upgrade. As my own light had grown through the sometimes quite painful process of transformation, the physical environment and heart of my personal practice was reflecting this transformation. This was when I felt a thrill of excitement of being 'in the game', and knowing it.

I realized that the changes within me had invoked the power of Shiva, the destroyer, one of the three aspects of the divine (G-O-D, or Generator, Organizer, Destroyer). In the always synchronous, poetic and humorous way of the universe, it was as above, so below. There was nothing to fear -- on the contrary, this was to be celebrated. The insurance came in like troopers and gave us a cheque that covered the lion's share of what it would cost for the studio to be reborn in a new incarnation -- they even waived the $2000 deductible! I know, right? The work was done in large part by Thelon, someone I trust, connected to one of my dearest friends, while I was away in the south of France. It was an entirely painless process.

And a year later, I have a brand new, beautifully renovated studio. New and bigger windows, a skylight, warm cork floors, a reinforced footing, and walls that are insulated and ship-shape: a space of light and openness that feels great to walk into. A place I can share with others and where I can step into my role as a teacher in a new way.

As I wrote this first blog entry, it was still full of boxes. I'd been travelling all year and hadn't been home long enough to deal with all the stuff that was salvaged and cleared out when it flooded, delivered by the storage company and placed on a tarp in the middle of the floor. I had work to do! But it didn't freak me out because I knew it was all part of the game, the play of the universe, what we call Leela. And I felt excited and happy because I could feel it playing with me, and I wanted to play with it.

I spent a week upon my return from working in Ottawa, during that period between Christmas and New Year's Day, going through box after box like a machine, taking trips to IKEA, building cabinets so that I could get stuff off the floor and get the beautiful new studio ready for the 'Activation Party' I announced to everyone would take place on January 1st. I had a deadline and I was ready to meet the challenge of having everything ship shape and perfect to greet the students of Kundalini Yoga Stratford. Note the word 'perfect'.

And then, I lifted the tarp.

Real change is cellular, not intellectual.

Why do Teacher Training?